What is Totals Betting?

If you’re just getting started with sports betting, it can be challenging to know where to begin. Even if you’re a regular bettor, getting lost among the choices is easy.

Sometimes, it’s best to keep it simple. There are three base options when we think of traditional sports bet types. The first two are moneyline and point spread, and the third is the totals, aka, the over/under bet.

What is Over Under Betting?

Totals betting, or over/under betting, is the process of placing a wager on whether the combined score of the two teams will be over or under an amount of points that oddsmakers set in advance of a game.

It’s that easy. Sportsbooks will have the totals number set before a game begins, and bettors will have two choices: over or under. If the two teams’ combined score is higher than the number that oddsmakers have set, then bets on the “over” win. If the combined score is lower, it’s a win for the “under” bet.

There are options for markets at nearly all online sports betting sites, such as team totals or totals for a specific part of a game (quarters or halves). These are often categorized as props and aren’t conventional betting markets. For the sake of education, we are sticking to the full-game totals with the combined points of both teams. 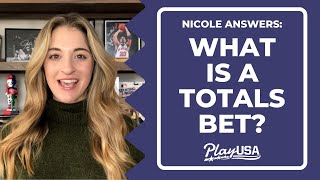 How Do I Bet Totals?

There’s no better way to understand how a total bet works than by using an example. So, let’s take a look at the over/under set by DraftKings for betting on the Iowa Hawkeyes basketball game against North Carolina:

DraftKings Sportsbook set this over/under at 158.5 points. As is the case with point spreads, the total will be the same for each team. A bet on the over requires 159 points or more to secure a victory, while anything at 158 points or fewer will be a win for the under wager.

While the total is the same on both sides, we can see that the price that comes with each side (the “juice” or “vig,” as it is known) may vary from one to the other.

NBA over under betting

NBA totals betting is not unlike our example that covered NCAA basketball. Take this example of the Chicago Bulls against the New York Knicks:

With the total at 209 points, a bet on the over requires 210 total points or more. However, a wager on the under is a win if the score adds up to 208 points or fewer. In the event the game ends up at exactly 209 points, the sportsbook will consider the bet a “push,” and it will return bettors’ original stakes on both sides.

The key difference when wagering on an NBA total than an NCAA total is that the over/under figure itself will be higher. This is because professional basketball teams tend to score more than college teams. There are several reasons for this, including that the NBA has a shorter shot clock and more playing time in each game.

A college basketball game consists of two 20-minute halves, while an NBA game is four 12-minute quarters for a total of 48 minutes. The shot clock for NCAA games (both men’s and women’s) is 30 seconds, while NBA games feature a 24-second shot clock, leading to more possessions and more points.

NFL over under betting

Wagering on NFL totals doesn’t differ much from basketball. In fact, the process is the same, and all the rules apply in much the same way. Take our example:

The juice on this particular total is shaded a bit toward the over at -115, considering that most lines begin around -110.

There are several reasons for this type of line movement. It’s possible that both sides start at -110 and more action on the over pushed the line to -115. It’s also possible that oddsmakers saw more value in the over from the start and shaded the price in that direction, knowing the public may be keen on it.

Whatever the reason, the juice is a great reason to line shop at multiple sites and be sure to get the most advantageous line possible.

MLB over under betting

As we all know, baseball isn’t a sport that lights up the scoreboard the way basketball or football does, so totals betting in baseball is a bit different. Let’s look at an example using two popular teams among Iowa baseball fans:

Even though the total score of an MLB game is unlikely to match a football game, much less a basketball game, the process of wagering on the total and calculating the risk/reward is the same.

With fewer runs in baseball than points in some other sports, each half-run matters plenty. It will take a lot of action to move the run total by a half-point because of this, so it’s quite common to see a wider variation in the juice when looking at baseball betting lines compared to other sports.

When it comes to wagering on totals in baseball, the starting pitchers and the weather are two things all you need to keep in mind.

NHL over under betting

Hockey is a sport where goals come at a serious premium, even more so than baseball runs on many occasions. Below is an example of a hockey total:

Hockey totals usually hover between five and 6.5 goals, with 5.5 and six being the two most popular totals. Since each goal is so valuable, it is quite common for the juice on these totals to alter more than most other sports before a total will move by half a goal.

Hockey is also a sport where the losing team may pull its goaltender at the end of games, leaving an empty net for the team in the lead. It is common for an empty-net goal (or lack thereof) to play a serious role in whether a game goes over or under.

What is Alternate Totals Betting in Sports?

As is the case with point spread betting, there are markets at most online sportsbooks and mobile betting apps for alternate totals. This allows you to venture outside of the over/under set by oddsmakers and select nearly any total they want, within reason.

The sportsbook will modify the line, which will require you to risk more when buying points, runs or goals. At the same time, you can earn extra by selling them for a line that comes with a higher potential payout.